I had the opportunity to tour my first brewery a few weekends ago, Rivertowne Brewing just outside of Pittsburgh in Export, PA where the Hala Kahiki Pineapple Ale, one of my favorite fruit beers, is brewed. There I had the pleasure of meeting “Cowboy Paul” whose attire fit his name with a shirt buttoned up halfway and a large brimmed cowboy hat. Cowboy Paul gave me an excellent, first-time overview of the brewing process at a large scale.

Upon arrival I was asked if I wanted a beer. How could I turn that down? Because I had only ever had their Hala Kahiki, I wanted to try something different. Luckily they had two seasonal sours on tap. I don’t recall the name of the first one, but I tried it and it was very tart. I wasn’t in the mood for a tart beer so I went with their Strawberry Rhubarb Sour Amish Mafia and it was delicious. I ended up taking a 32 ounce crowler of it home.

One of the first pieces of wisdom that Cowboy Paul bestowed upon me as an aspiring brewer was that all beer has four main ingredients: grain, yeast, hops, and water. Nearly all modern day beers contain these base ingredients. Interestingly enough, in 1516 a law was adopted in the German state of Barvia known as the Reinheitsgebot which declared that the only ingredients permitted in the production of beer were barely, hops, and water. The existence of yeast was unknown at the time so it was not included. But it’s a great example of how those four ingredients have been used to brew beer for centuries.

Cowboy Paul first showed us the giant silos outside of the brewery that must have been about 20 feet tall filled with grain. The grain is dispensed inside the brewery from a pipe and weighed before being split apart in preparation to make “wort”, the sugary liquid processed by the mashing of the grains. Essentially, the grains are split, conditioned, and boiled in four huge ten foot tall tanks. The wort consists of the water and the sugars extracted from the grains. What remains of the grains is then separated and Rivertowne Brewery gives it to a nearby farmer who feeds it to his livestock.

The wort is then combined with yeast which then eats the sugars in the wort and ferments. The enclosures where the fermentation takes place, “fermentors”, were about the same size as the silos of grain and the beer can sit in there for 2 weeks or so fermenting. This is also the stage of the process in which other ingredients such as the pineapple in the Hala Kahiki or the strawberry in the Amish Mafia are added.

Cowboy Paul also told me that when you get right down to it, there are really two types of beer and all the other types are simply subsets: lagers and ales. I had already heard this before but I didn’t know the primary difference between the two. According to Cowboy Paul, ales are fermented at 60° to 70° Farenheit while lagers are fermented between 35° to 40°. The temperature ranges may vary depending on who you talk to, but I found it fascinating that the temperature could affect the taste and brew so drastically.

Upon doing more research, there is a difference in the yeast used as well. You can’t simply choose what temperature to ferment at and use the same yeast for any beer. Rather, you must prepare beforehand and purchase yeast meant for either an ale or a lager. So it’s not solely the temperature that determines the type of beer. 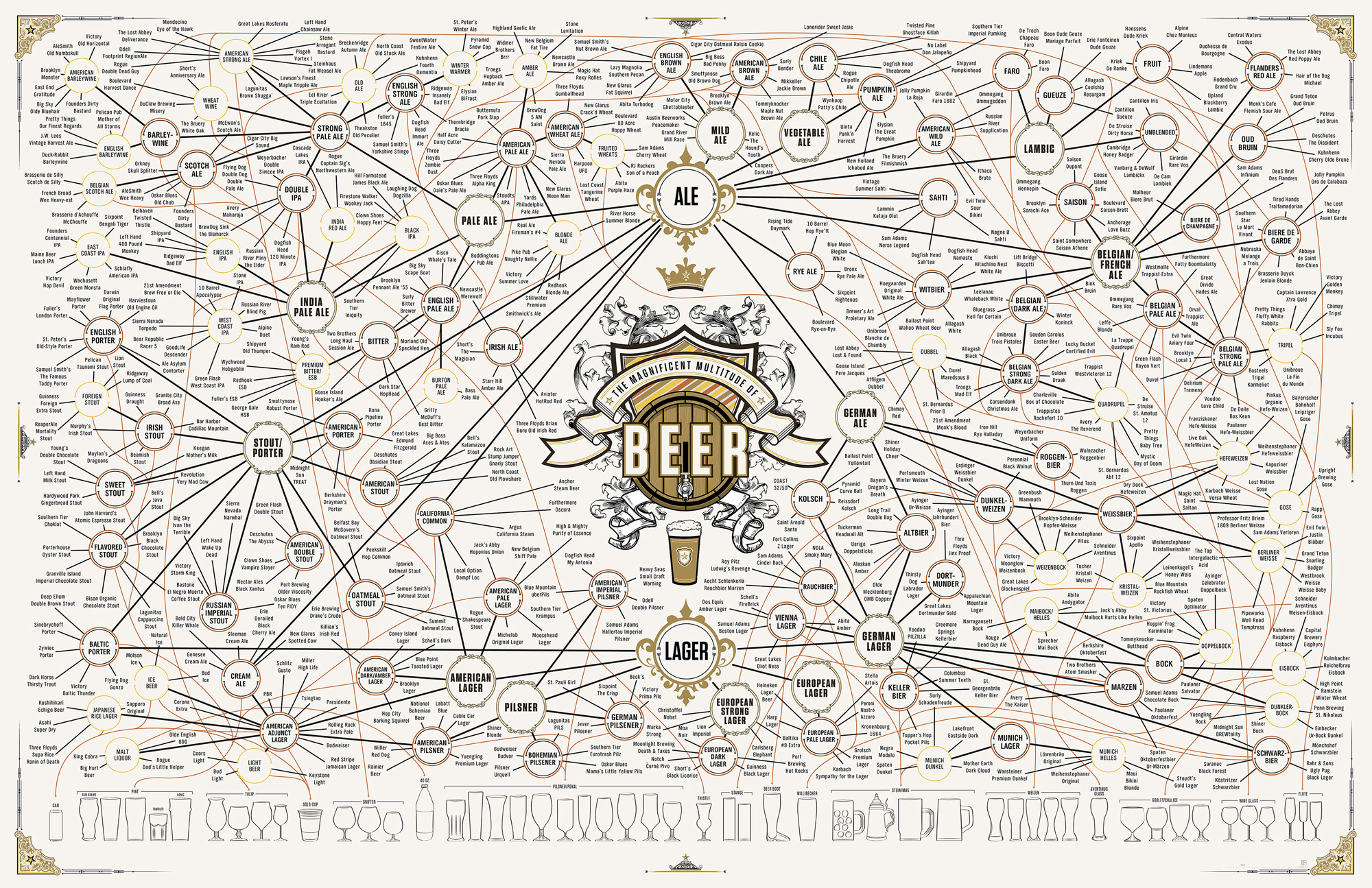 A mapping of known beer types by Pop Chart Lab

One of the fermentors had a tube running to a five gallon bucket. Huge, thick bubbles were running out from the tube. This is completely normal in the fermenting process. The bubbles from this beer were particularly clean and clear. I didn’t ask him what beer was being fermented there but now I wish I had.

The day of the tour happened to also be canning day. They were getting ready to send off a large shipment of twelve packs to their distributing area, which consists of a large portion of the central east coast States. Just a couple days ago they announced an expansion to the Boston area, which is exciting because the beer is great.

I noticed they weren’t using any bottles to package their beer. When I asked Cowboy Paul why that was he replied that the light that comes in through the bottles doesn’t allow it to age well. I as a bit confused because that is why brown bottles are used for beer. But upon visiting Blue Owl Brewing the following week, they also only use cans, albeit for different reasons. But it appears that bottles may slowly become a thing of the past in the brewing world. I guess only time will tell.

The canning process is largely automated with some manual intervention. The cans work their way down the line and are filled with CO2 and beer. It’s my understanding that the CO2 is meant to clear out all the oxygen from the can before the beer in poured in. Like wine, the taste of beer is affected if exposed to oxygen for too long. At the end of the canning line is a large triangular platform where the cans are gathered. As that area fills with cans, they are taken and packaged as either four packs, six packs, or 12 packs. I wish I could have seen them filling up the kegs, but the canning line was pretty cool.

Overall, the experience was great and I learned a lot. If you ever get a chance, you should definitely try some Rivertowne beer. They make some great session ales that are great for a summer afternoon!

A self-described technologist, activist, skeptic, and sour beer lover Ethan Gregory Dodge is venturing into the world of homebrewing after not drinking a drop of alcohol before the age of 25.